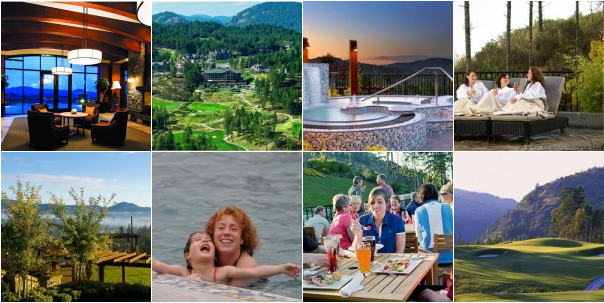 Our honored guests are:

The 2014 Rocky Mountain Neurosurgical Society Meeting will be held from June 14th through June 18 at  Westin Bear Mountain Resort and Spa, Victoria, British Columbia.  Dr. Lee Krauth is serving as the local arrangements chairperson, and is putting together an exciting array of activities for members, guests, and their families at this pristine iconic Mountain Resort.

Located in a sub-Mediterranean zone, Victoria, British Columbia boasts the mildest climate in Canada.  Victoria receives  an average of  2,183 hours of sunshine per year.  The average monthly temperature for June 67°F.

Just a few miles west of The Westin Bear Mountain Golf Resort & Spa, Victoria is Goldstream Provincial Park, home to Mount Finlayson, one of the most popular hiking destinations near Victoria. The trail going up is rugged and at times steep, but immensely rewarding thanks to the beautiful native trees and flowing Goldstream River. At the top of the 656-foot peak, you’ll enjoy panoramic views, including the resort and city of Victoria, as well as the Strait of Juan de Fuca and the Olympic Mountains in the distance

A short drive to downtown Victoria offers a myriad of activities. From museums and castles to whale-watching and kayaking, wine and beer tours, gardens and zoos, Victoria’s attractions invite visitors into a world of history, entertainment, and color.  The capital city of British Columbia, Victoria is located on the southern tip of Vancouver Island off Canada’s Pacific coast. The city has a population of about 80,017, while the metropolitan area of Greater Victoria, has a population of 344,615, making it the 15th most populous Canadian urban region.

Named after Queen Victoria of the United Kingdom and, at the time, British North America, Victoria is one of the oldest cities in the Pacific Northwest, with British settlement beginning in 1843. The city has retained a large number of its historic buildings, in particular its two most famous landmarks, the British Columbia Parliament Buildings (finished in 1897 and home of the Legislative Assembly of British Columbia) and the Empress hotel (opened in 1908). The city’s Chinatown is the second oldest in North America after San Francisco’s. The region’s Coast Salish First Nations peoples established communities in the area long before non-native settlement, possibly several thousand years earlier, which had large populations at the time of European exploration. Victoria, like many Vancouver Island communities, continues to have a sizable First Nations presence, composed of peoples from all over Vancouver Island and beyond.

Social Highlights – All attendees, including exhibitors, are invited to our social program*.

Upon completion of this program, participants should be able to: